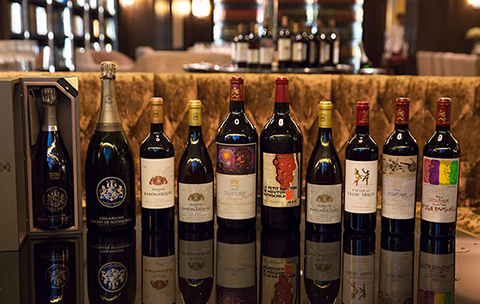 The wine dinner, a first in Malaysia, featured a selection of fine wines and champagne from Baron Philippe de Rothschild S.A. — Pictures by Zuraneeza Zulkifli and courtesy of Bordeaux Liquid Gold

It is a special honour for Malaysia to be selected as only three to five dinners are held worldwide on an annual basis.

In 1853, Baron Nathaniel de Rothschild purchased Brane-Mouton in Pauillac and renamed it Mouton Rothschild. In 1922, his great grandson Baron Phillipe took over and created Mouton Cadet in 1933 which has now been elevated to the world’s leading Bordeaux AOC brand. 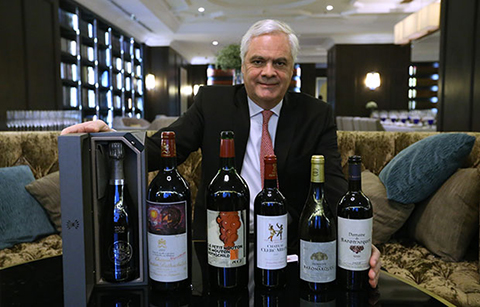 In 1970, they purchased Château Clerc Milon and Mouton Rothschild was elevated to First Growth status in 1973. They also have created a dry white wine, Aile d’Argent and Le Petit Mouton.

Joint ventures have also been created such as Opus One with California-based Robert Mondavi and Almaviva with Concha y Toro, in Chile. In 1998, they purchased Domaine de Baronarques in the Pays d’Oc.

Since 1945, there has been strong ties between Mouton and the arts. Each year, wine labels have been illustrated by great artists such as Dali, Picasso, Andy Warhol, making them highly sought-after collectors items. 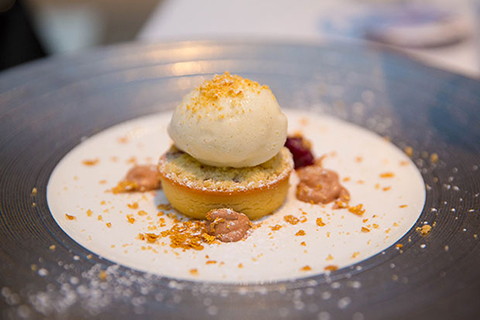 A sweet end to the dinner with a cherry tartlet topped with crumble and served with Jivara chocolate creme that was paired with Chateau Mouton Rothschild 2005.

In 1962, they opened the Museum of Wine in Art on their premises which is a leading tourist attraction as it houses a collection of precious objects celebrating the wine.

The Malaysian dinner was hosted by Baron Philippe de Rothschild S.A. Commercial Director Hervé Gouin who believes in the potential for their wine in Malaysia. “I think the market has started to be more open,” he said.

In Malaysia, they have partnered with Bordeaux Liquid Gold, who has been distributing their wines for 10 years. Bordeaux Liquid Gold Chief Executive Officer Julian Poh tells us they have also been awarded exclusive distribution rights for Champagne Barons De Rothschild and Domaine de Baronarques, that has been labelled as a “golden opportunity” by Gouin.

He also adds that they selected the company because, “Firstly, it’s because we trust them. It’s important to trust people in this business. We expect that the Malaysian market will grow and we have the right people to introduce the brand to the market.” 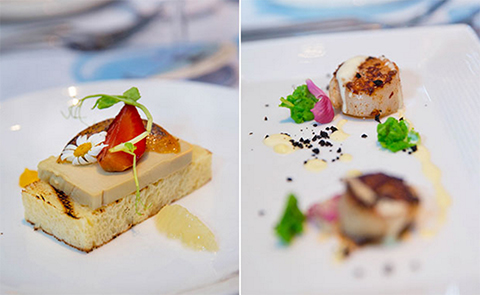 A creamy foie gras terrine topped milky brioche and was served with lemon confit and berries that was paired with Chateau Clerc Milon 2009 and Chateau Petit Mouton 2007 in magnum (left). The appetiser was seared scallops, crushed peas, black olives with cream sauce that was paired with Domaine de Baronarques 2009 (right).

For the wine pairing dinner held at The Library, Ritz-Carlton KL, they brought out a selection of their classical wines like Château Mouton Rothschild, Château Clerc Milon and Château Petit Mouton.

“We have a nice selection of different vintages and different estates. It’s a small travel around the French wine culture in the Pauillac region, south-east of France,” said Gouin.

The dinner also debuted two interesting wines from the Domaine de Baronarques, a small steep sloped estate in the Limoges region at the south of France, purchased by the Rothschild family. 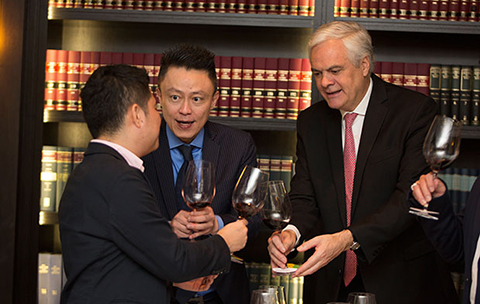 “They invested money to replant and readapt a selection of vines to produce a top red wine and white wine,” explained Gouin. What makes this vineyard unique is its double climate. “You have the influence of the Bordeaux climate and the Mediterranean climate,” said Gouin.

Wine aficionados will appreciate the Chardonnay with its elegant taste and the aromas of pear, lemon and hawthorn. “It’s a top Chardonnay with the ambition to compete with the other labels. It’s a very concentrated Chardonnay with a lot of acidity, very elegant and extremely mineral,” explained Gouin.

The other is a classical red wine Domaine de Baronarques with a deep bright garnet red colour and the aroma of blackcurrants, notes of cedar and eucalyptus. Gouin also goes on to explain that in the varietal mix for the wine, you have more of the Mediterranean influence with the Syrah and because of the appellation, there is more of 50 per cent of Merlot. The blend also contains a top Cabernet Sauvignon.

“In terms of how we produce the wine, everything is done exactly like Mouton, in the Bordeaux style,” said Gouin. This includes picking the grapes by hand he says, putting it whole into small baskets of 12 kilograms, bringing it carefully to the cellar followed by fermentation and maturation in the oak casks. 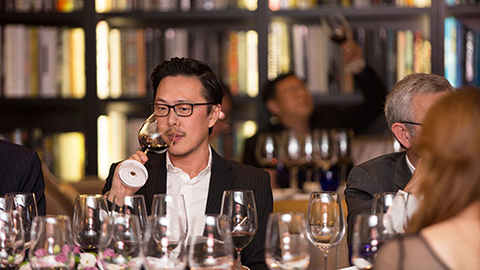 The exclusive wine dinner was enjoyed by a group of wine connoisseurs.

Even the same technical team from Mouton is in charge of the estate. “It is like a Bordeaux classic except it’s in Limoges and we have a combination of climates,” he said. Since its introduction to the Malaysian market about six months ago, the two wines have been incredibly well received, according to Poh.

For dinner, fine French food was paired with the wine and champagne. It kicked off with Champagne de Rothschild Blancs de Blanc Grand Cru in magnum, which has the bouquet of softly toasted vanilla beans.

The Champagne De Rothschild Vintage 2008 was also served and boasted an exceptional finesse. Le Chardonnay de Domaine de Baronsques 2014 was paired with the amuse bouche of cured salmon, shaved fennel, and avruga caviar where its freshness complemented the creamy taste of the appetiser. 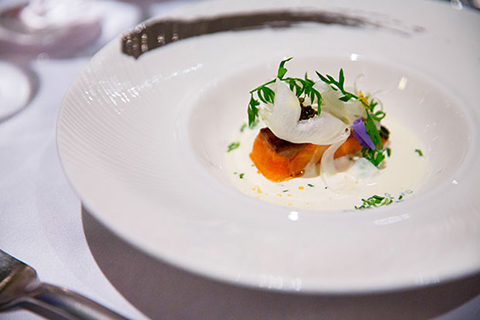 For the Domaine de Baronarques 2009, this was paired with an appetiser of seared scallops, crushed pea, black olive and cream sauce.

The second appetiser of foie gras terrine that topped a toasted milky brioche paired with lemon confit and berries, saw a tasting of Château Clerc Milon 2009 and Château Petit Mouton 2007 in magnum.

The Château Clerc Milon wine has a nose of black fruit mingled with floral, mineral and liquorice notes. Drinking it gives you a highly refined rich, elegant wine with well integrated tannins.

In contrast, Petit Mouton which is made from Cabernet Sauvignon, Merlot and Cabernet Franc grapes has more floral notes and a variety of spice. 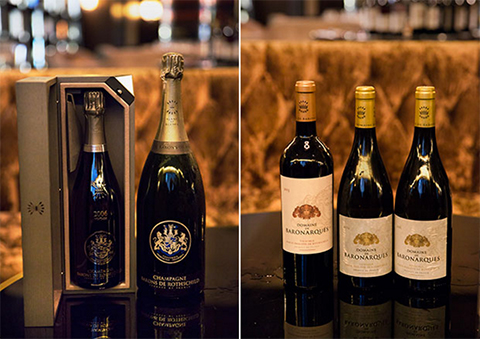 For the main course of rib eye steak served with pomme puree, asparagus, baby carrots and thyme jus, this was paired with two exceptional Château Mouton Rothschild wines, vintages 1998 and 2001.

Comparing the two vintages, the 1998 has juicy, succulent tannins with concentrated blackcurrant and blackberry flavours while the 2001 vintage displays complex fruits, rich in ripe berry fruit aromas like bilberry and blackcurrant with some pleasant smoky notes.

The meal ended with Château Mouton Rothschild 2005 paired with a cheese platter and dessert of a cherry tartlet topped with crumble and served with a Jivara chocolate creme.